ShmooCon and The Shmoo Group are pleased to announce the keynote for ShmooCon 2016, Neil Gershenfeld. 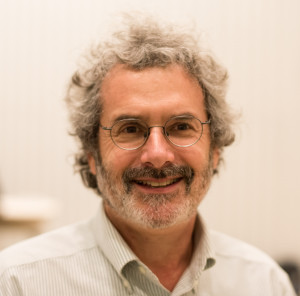 Prof. Neil Gershenfeld is the Director of MIT’s Center for Bits and Atoms. His unique laboratory is breaking down boundaries between the digital and physical worlds, from creating molecular quantum computers to virtuosic musical instruments. Technology from his lab has been seen and used in settings including New York’s Museum of Modern Art and rural Indian villages, the White House and the World Economic Forum, inner-city community centers and automobile safety systems, Las Vegas shows and Sami herds. He is the author of numerous technical publications, patents, and books including Fab, When Things Start To Think, The Nature of Mathematical Modeling, and The Physics of Information Technology, and has been featured in media such as The New York Times, The Economist, NPR, CNN, and PBS. He is a Fellow of the American Physical Society, has been named one of Scientific American’s 50 leaders in science and technology, as one of 40 Modern-Day Leonardos by the Museum of Science and Industry, one of Popular Mechanic’s 25 Makers, has been selected as a CNN/Time/Fortune Principal Voice, and by Prospect/Foreign Policy as one of the top 100 public intellectuals. Dr. Gershenfeld has a BA in Physics with High Honors from Swarthmore College, a Ph.D. in Applied Physics from Cornell University, honorary doctorates from Swarthmore College, Strathclyde University and the University of Antwerp, was a Junior Fellow of the Harvard University Society of Fellows, and a member of the research staff at Bell Labs.

The link to our 2023 puzzle solution slides. #ShmooCon https://docs.google.com/presentation/d/1q6FmN4gYbhnk61Vn8fNIa4Eu2ENkbmR3lsdNabMYLSc/edit?usp=sharing

That's a wrap! Thanks for coming to ShmooCon. See you next year! We welcome feedback to info@shmoocon.org.

The show is coming to an end. Join us for the ShmooCon 2023 Closing Ceremony in just a few minutes: https://shmoocon.org/streams/

I gave the "Shmoosical Overture" a go on the piano to see what it sounds like: https://youtu.be/s31tyot2Rv8
@ShmooConPuzzle @shmoocon

SHMOOCON SUPPORTS THE FREE AND OPEN EXCHANGE OF INFORMATION.

We are proud to have attendees with unique and diverse viewpoints on just about any topic.
We want to foster the exchange of ideas among attendees and think the community benefits from inclusiveness.
To that end, we are committed to providing a friendly, lively, and welcoming environment for all.